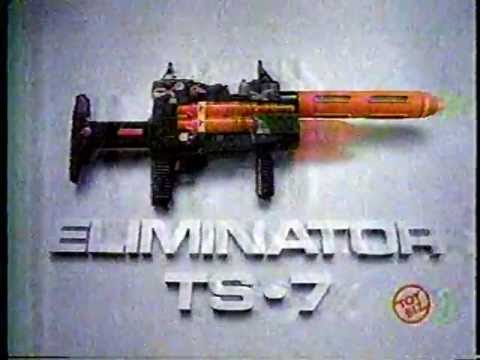 Born in the 80’s, you think, “If I were rich I would buy all the toys I wanted and never had”. Here is little reminder of which toys were the on the top list for Santa in the 80’s and 90’s and are now totally forgotten.

The Eliminator TS-7 was an electronic 7 in 1 weapon, from sword to bazooka with lights and sound, that toy commercialized in 1992  allowed you hours and hours of fun. If your were a child in the 90’s, that was your weapon of choice.

The real Ghostbusters serie by Kenner :

Ghostbusters franchise really was a thing in the 80’s and if you were a kid you must have had one of those totally forgotten toys.

Monsters in my pocket (MIMP) by matchbox :

Those were plastic figures with trading cards that you were exchanging in the schoolyard in the 90’s. They were inspired by legendary monsters such as vampires, mummies, griffins, hydra and werewolves and you could collect over 200 of them.

Simply one of the best RC toys, period. It was one of the fastest (around 12MPH or 20km/h) and one of the most, if not the highest selling RC car ever.

80’s and 90’s kids were addicted to monsters and that’s why Mattel made a huge buzz releasing the bogglins in 1987. Those were hand rubber puppets sold in boxes representing a jail.

They were flexible frisbees in the shape of monsters like dracula, werewolf, yeti, mummy  or on the TMNT theme and they were very colorful.

And you? What’s your favorite forgotten toy from the 80’s and 90’s?

© IfIWereRich and www.ifiwererich.com, 2018. Unauthorized use and/or duplication of this material without express and written permission from this site’s author and/or owner is strictly prohibited. Excerpts and links may be used, provided that full and clear credit is given to IfIWereRich and www.ifiwererich.com with appropriate and specific direction to the original content.